Buzz Lightyear of Star Command Wiki
Register
Don't have an account?
Sign In
in: Characters, Individuals by unnamed species, Antagonists 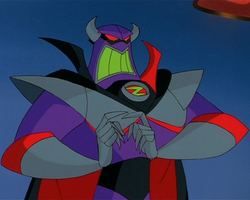 Evil Emperor Zurg or better known as Emperor Zurg or simply known as Zurg is a rogue monarch and dictator in opposition to Star Command and the Galactic Alliance, Buzz Lightyear's arch-nemesis, and the most widely-feared villain and criminal in the galaxy. His chief goal seems to be to dominate the galaxy, each planet and entirely; the first phase to this campaign being the conquering of the Galactic Alliance and the defeat of its armed forces at Star Command. However, his enmity with Buzz Lightyear and the sabotage of his plans by he and Team Lightyear consistently thwarts this goal. While not the only domestic threat to the Galactic Alliance, he poses perhaps the greatest, and often confederates with other villains, ruffians, and enemies of the state from across the Galaxy.

Just as little to nothing is known of Commander Nebula's backstory (or indeed, the very setting of the Galactic Alliance), neither is it known how Zurg came to power, or his origins as an individual. Consistently throughout his recorded actions, he governs (and seemingly constructed, employing a variety of centrally-controlled technological and logistical systems) a vastly powerful, sinister empire and dictatorship the warlike actions of which constantly threaten the sanctity of the galaxy and the Galactic Alliance. The rule by strength system imposed by Zurg suggests that his realm is a rogue state, a terrorist hermit-kingdom of sorts; yet he seems to treat it as though it were merely a bizarre business or corporation of which he is in charge.

It is also unknown how many planets and sectors he possesses in his governance, but it is apparent that several lie within his borders; such as the Mine-Panet in "Shiv Katall," in addition to his capital at Planet Z.

In regards to his personal origins, nearly nothing can be found, but it can be inferred that they were disfunctional. He claims to have had a grandmother named (or nicknamed) "Nana Zurg", who he describes as "plenty evil." He appears to have had a close relationship with his mother, as he often mentions her while sleeping. This may suggest an unhealthy relationship with authority figures, which in turn could explain his distinct megalomania. In one episode, "Stranger Invasion", in battle with Lightyear, he claimed to be his father; yet, this was but a ploy to distract the Space Ranger and give Zurg the upper hand. He was quick to pass off the claim as a "Made You Look" scheme. Nonetheless, the potent grudge against Zurg held by Buzz suggests that some grief lay between them, for which Buzz sought revenge.

Zurg takes the form of a tall, thin-built but broad-chested humanoid of unknown species clad in armor and robes of royal purple. His head is always sealed in a great helmet crowned with horns, through which a pair of angular red eyes and a grille of yellow teeth (or at least a frowning bevor or mouthpiece) stare forth. His chest is clad in a grey and purple chassis, possibly of steel, his arms in gauntlets of steel tipped with cruel claws. His feet are shrouded by long, imperial robes of purple, and over all he dons a dramatic black cape lined with red, with upturned lapels in vampiric fashion. The clasp on of his cape is emblazoned with "Z," and it apparently functions as a sort of control panel for his various systems, for with it, he can activate his rocket boots, permitting him the ability of flight. Although not obvious at first glance, due to his obscuring robes, he does indeed have feet, demonstrated by his rocket boots which he apparently "got on sale".[1]

It is obvious that Zurg's visage is that of an armor-clad humanoid, rather than some robotic form, as he was physically reduced to a blob-like creature in The Crawling Flesh, wherein he wore his helmet over a blob-like helmet with a newly visible mouth. Despite this, Zurg's supposed true appearance has never been seen, leaving the identity of his actual race unknown.

He has a strange fear of being touched, mentioning something about "personal space" and "cooties" in the episodes "The Torque Armada" and "The Main Event". He is also somewhat picky about his schemes, claiming when politicians were being kidnapped that he would never do something "so obvious." When Team Lightyear disbelieved this, Zurg then called their bluff and said to his underlings, "Is anyone going behind my back? Come on, out with it!" When Gravitina and the others denied abducting anyone from Capital Planet, Zurg's innocence was finally believed, only for him to say to Buzz, "but we do have something good cooking up, just you wait!"