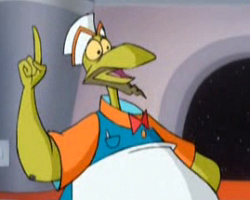 Cosmo is the chef and owner of Cosmo's Cosmic Diner.

A green alien neither too tall nor too short, Cosmo is slightly portly with thin limbs compared to his belly. He has a crooked tail almost as crooked as his dark green beard, and the alien has a large nose just below his yellow, spherical eyes. His right hand is organic while his left appears to be cybertronic.

He talks with a slight foreign accent.

Throughout the series Cosmo is the proud owner of the titular outer space diner that's out of this world, Cosmo's Cosmic Diner. Ingenious play on words, no? But other than being the owner and scrambling cook, it is never explained as to how Cosmo came into the business or made his keepings.

He does have a great repertoire of customers, and they range from Buzz Lightyear all the way to the Evil Emperor Zurg himself! Talk about impressive work in the kitchen.

While not given much publicity throughout the series, Cosmo is typically seen as a well-to-do guy with a cheerful demeanour and bubbly attitude. He does have a way with trying to save money and purchasing upgrades, as in the case with Mira destroying his current vid-screen, and he had an extreme dislike for bugs, most likely due to health department regulations.

Retrieved from "https://blosc.fandom.com/wiki/Cosmo?oldid=25318"
Community content is available under CC-BY-SA unless otherwise noted.