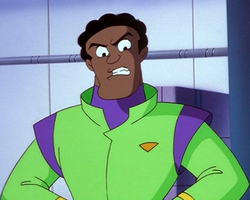 Biographical Information
Physical Description
Relationships
Powers and Abilities
Production Details
“Guess what, pal. You're through.”
The corporal is a human Space Ranger, a low-ranking officer[1] who also occasionally works as a flight controller.[2]

He is a dark-skinned male human with curly, black hair and a square-shaped jaw. As a Space Ranger, he alternates between wearing the standard spacesuit and the green-and-purple officer's uniform.

Back when Booster was still a lowly janitor, the Corporal caught him sneaking into the launch bay without permission. Before he could administer punishment, however, Buzz Lightyear came in and informed the man that Booster was merely tending to his janitorial duties. The man let him Booster go after that.  Since then, he has taken part in a number of other missions and assignments alongside other Space Rangers.

While a stickler for the rules, he looks up to Buzz Lightyear in a mixture of fear and awe. [1]

Retrieved from "https://blosc.fandom.com/wiki/Corporal?oldid=22602"
Community content is available under CC-BY-SA unless otherwise noted.