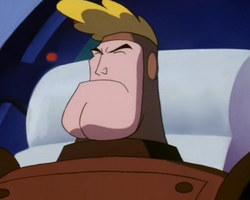 Cooley (also known as Wild Bill) is a human male who was frozen for fifty years in his spaceship in his attempt to save Verdentia.

Cooley, for the most part, seems human with pale skin. He has a generous, split chin and squinty, tight eyes. His hair is blond and juts out in a dominant 'do. Broad and robust, Cooley is far from being an easy target. His uniform is fifty years old and is similar to aviation gear found on certain airplane pilots.

If the viewer is diligent with their eyes, they will find that Cooley has four fingers on one hand, not five.

Fifty years ago Cooley was scheduled to bump a comet off of a collision trajectory with Verdentia, which housed peaceful people. Because he got caught in the comet's tail, however, he was frozen solid for a whopping total of fifty years and wasn't awakened until Buzz Lightyear happened to stumble upon his flash-frozen body. Once unfrozen, it took both Cooley and Buzz to stop the comet once and for all, and what happened after that...no one knows.

Cooley was never seen again in the series.

A tough old man, Cooley won't mollycoddle you. He'll school you, berate you, and make you do the job right or not at all. But despite that Cooley isn't a bad individual and he was rather impressed with Buzz's handling of his ship during the time they both worked together to dislodge the comet from hitting Verdentia.

Even though he may have been frozen for fifty years, Cooley has proven that he was one tough cookie, refusing to give up even though he was unable to do anything. Over the past fifty years, he learned new abilities, trying to communicate with someone to free him.

Cryokinesis: Cooley was able to freeze objects in their tracks, whether they were people or blowtorches.

Water Manipulation: He was able to summon gusts of mist and fog to form shapes or communicate with other beings.

Air Manipulation: Cooley also could make winds appear at will, signalling his presence.

Astral Projection: He also somehow learned to speak without the use of mist and fog, as though he were indeed a real spirit.

Projected Thermography: Although it was only used once, Cooley could also write messages on ships.

Retrieved from "https://blosc.fandom.com/wiki/Cooley?oldid=24625"
Community content is available under CC-BY-SA unless otherwise noted.