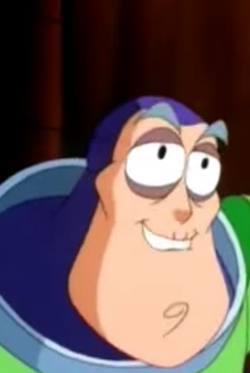 Due to old age Buzz from the future is very short in stature and wears a completely different spacesuit than his younger self. Noted by his insignia, he is ranked down to rookie. He wears a time watch on his right wrist.

His advanced age has led Buzz to become humble and wise as he is quite patient with others and only raising his voice when the situation requires it. However, his compassion for his comrades is retained, which ultimately led him to build the time watch to save Mira from death.

After using the time watch, Buzz developed a case of memory loss, much to his frustrations and the frustrations of others, particularly his younger-self.

When he met his younger self, the old Buzz laments how stubborn he was back then although he too can be stubborn as well.

Retrieved from "https://blosc.fandom.com/wiki/Buzz_Lightyear_(future)?oldid=25979"
Community content is available under CC-BY-SA unless otherwise noted.