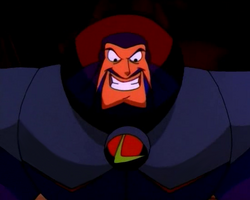 “Buzz Lightyear, spreading evil to infinity, and beyond!”

As the alternate universe copy of Buzz, he is identical to his counterpart Buzz Lightyear in every way, except for having facial hair colored dark blue.

He wears armor similar to Zurg's, but with pants and without a cape, and the letter L in the center of his chest instead of the letter Z. At one point, he wore good Buzz’s Shiv Katall outfit, which consists of a blue helmet and armor.

Not much is known about the Evil Buzz Lightyear's past or how he came to be evil in the first place. He is, however, in possession of the forces and staff which formerly belonged to the Zurg in his dimension; and once mentioned that the Zurg in his world didn't have what it took to be evil. This leads us to believe that it was after acquiring Zurg's forces that he went on to conquer his dimension, destroying most planets along with the headquarters of the Galactic Alliance and Star Command.

One of Zurg's brain pods accidentally creates a rip in the fabric of the universe, leading the Evil Emperor and his forces to an alternate dimension, where planets like Jo-Ad, Tangea, Bathyos and Capital Planet lie in ruin and Star Command is nothing but cosmic dust. Excited at the prospect of meeting his other self, Zurg boards the counterpart dreadnaught, but comes face to face with an evil Buzz Lightyear instead. Quickly shifting gears, he proposes that he and Evil Buzz work together to conquer his dimension, aptly suggesting that there is a worthy enough opponent for him to face there; none other than his own counterpart, Buzz Lightyear. Though at first reluctant to repeat what he had already done, this intrigues him and Evil Buzz agrees to follow Zurg into his dimension.

Evil Buzz and Zurg teamed up to attack Zurg's Star Command, after first stranding Buzz in the other reality on one of Evil Buzz's prison planets. However, Buzz managed to escape and ally himself with the Space Rangers of Evil Buzz's universe, who traveled to his home universe with him. Together, the Space Rangers of both dimensions succeeded in defeating Evil Buzz's forces, and the primary universe Rangers supplied their counterparts with resources that allowed them to retake their home dimension.

Feeling that Buzz had "ruined" his home universe, Evil Buzz has decided to return the favor by forming a partnership--both professional and romantic--with Gravitina, who found him while he was lost in space. She initially mistook him for the good Buzz until seeing otherwise and was more than pleased to find a version of Buzz that was already evil and they started making plans.

Adopting Buzz's old persona of the bounty hunter Shiv Katall, he stole various materials needed for a space station in orbit around the sun. This station was positioned, so that Gravitina could use her powers to produce devastating sunquakes that would send streaks of molten plasma hurtling around the galaxy. Eventually, his true identity and survival were revealed. He fled and his intentions were discovered, and Buzz and Mira Nova confronted him and Gravitina aboard their space station. Evil Buzz showed his true colors by abandoning Gravitina when the station stated to come apart, and seemingly fell into the sun and perished.

Unbeknownst to Buzz (but suspecting) and the others, however, Evil Buzz managed to survive by clinging to a piece of debris that floated away from the sun.

Essentially a nastier, more consistently evil villain than Zurg. He was also shown to be really uncaring, as he just leaves his former lover Gravitina to die or be captured by the Space Rangers to save his own skin. Evil Buzz acknowledges his evil nature and makes no attempts of changing, even when Buzz tried to point out on how he would never win and he disregards him.

He dislikes his heroic counterpart for his stance against him and for causing him to lose control of his universe after he supplied weapons to the resistance. While he does not think much of him, he knows for a fact to not underestimate good Buzz since they have similar methods of thinking and can perform what others consider impossible acts.

He possesses excellent fighting skills, weapons training, etc. He also wields a laser gun which can blow up places in one shot, and a jetpack that is identical to the real Buzz's.

Overall, he is very much the same as the good ('normal') Buzz. This is best seen when he is able to survive things like a ship's explosion or nearly falling into the sun.

Retrieved from "https://blosc.fandom.com/wiki/Buzz_Lightyear_(alternate_universe)?oldid=26104"
Community content is available under CC-BY-SA unless otherwise noted.