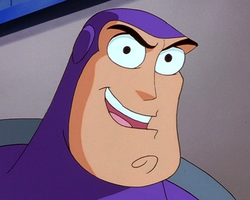 Buzz Lightyear is Star Command's most prolific Space Ranger, having the reputation of always triumphing over evil. He is the leader of Team Lightyear, alongside rookies Mira, Booster, and XR.

Buzz is a well-built, muscular human somewhere in his early or mid-forties.[3][4] He sports a broad chest and large feet, but also possesses a larger-than-average chin topped off with a characteristic swirl.[5] He has large, round eyes that appear black in the series as opposed to the blue eyes of his Toy Story counterpart.[6] Even when out of uniform, Buzz is never seen without his trademark purple head cowl, leaving one to question as to whether or not he has any hair.

Little is known about Buzz's childhood besides the fact that he was born on the planet Morph, located in the Gamma Quadrant of Sector 4.[1] He grew up hearing all about Star Command and always wanted to be a Space Ranger. He was most likely raised by his grandmother, Nana Lightyear, seeing as she is the only relative he has ever mentioned, never hearing of his mother or father.

Buzz also had an obsession with weapon-based toys as a child. For his sixth birthday, he asked Nana Lightyear for a Ranger-X Big Blue Rocket that shot real flames, but received socks instead, which he never really got over.[7] When he was nine, he wanted a Retro Rocket Racer with real flashing lights (and a working laser), and when he didn't get it for The Holiday, he stopped believing in Santa Claus. The reason he never received the gift from Santa was because he had somehow gotten hold of a blaster and injured his cat Fluffy, proving that he was irresponsible with such toys.[8]

It is unknown when he became a Junior Space Ranger signed up for the Space Ranger Academy, but at one point when he was twelve years old, he skipped out on a meeting.[9]

However, Buzz eventually matured and learned to be responsible about such things. During his training at the academy, alongside Warp Darkmatter and Ty Parsec, he studied long hours and underwent rigorous training, slowly becoming the Space Ranger he would come to be known as today.[3] He managed to finish first in his class and was eager to set off and get a taste of how Space Rangers operated. However, his enthusiasm in pursuing criminals proved to be too overzealous, forgetting how the court system could be used against him for his "over-the-line" conduct in arrests. Without the proper evidence, the criminal he had bagged in "Lone Wolf" was allowed to walk free and Buzz was faced with disciplinary charges over blowing up half of Alliance Plaza.

This led Buzz to become embittered by the justice system and he decided to quit Star Command and the life of a Space Ranger. He let the road take him wherever it would and ended up traveling all the way to the edge of the Galactic Fringe. On a lone planet, he crash-landed on an arcadium gas farmstead and met Myka and his mother Zoey, who sheltered him during his stay. He also encountered Vartkes, an overbearing gas baron who was causing trouble for the gas harvesters through deceptive means and violence. He helped Myka and Zoey handle Vartkes and rediscovered what it meant to be a Space Ranger, learning that a Space Ranger never gives up on what he or she believes in. Now, more than ever, was he determined to do the right thing, even if that meant adhering to the justice system. After arresting Vartkes and his punk-goons, he returned to Star Command.

Being a Space Ranger

Over the years, Buzz became famous for his daring tactics and good results, becoming a household name and the hero of young children everywhere. He was so good at being a Space Ranger that he even wrote half of the Space Ranger Mission Manual, though at what point in his career he did so is never revealed. Nevertheless, he had a lot of adventures throughout the years. When exactly he acquired Warp Darkmatter as a partner is also unclear, but judging by the lack of Warp's presence in "Lone Wolf" it is safe to say that it was after Buzz's encounter with Vartkes and perhaps even after most of Buzz's adventures with Ty Parsec seeing as he is never mentioned in them.

Buzz and Ty are considered legends at the Academy. Some of their adventures involved Buzz saving Ty from a flesh-eating drill wasp, from the brain ticks of Betahart 4, and from the chest-bursting vipers of Mutswroth. All in all, Buzz saved Ty around fifty times in total.[10]

Judging by most of the stories, Buzz had a reputation for saving Ty on a regular basis, something that the latter Space Ranger resented greatly. Although Buzz affectionately calls Ty his "buddy", completely oblivious to the latter's resentment, Ty felt that Buzz always overshadowed him, so when he was stationed at Canis Lunis he was more than happy to have an excuse to get away from Buzz. It is safe to say that they probably weren't partners.

Buzz's partner was instead Warp Darkmatter. Together, they made one of the best teams Star Command had ever seen, until Warp's betrayal.

Twenty years after his encounter with the gas baron, Buzz Lightyear has become a renowned Space Ranger. He has become a household name by this point, and everyone knows him.

Buzz is a one-dimensional individual, being wholly devoted to the idea of the model Space Ranger. While this has made him a highly decorated and accomplished hero, this has left him with very little resemblance of a social life, and he often appears confused or lost when handling non-Star Command related activity. However, despite being socially awkward, he is an honest man and a hard worker. He believes that diligence pays off, and that taking shortcuts often leads to complications, although he doesn't mind hiding things under the rug sometimes, such as reports. Despite his insistence on honesty and strict moral guidelines, he is not above bending small rules once in a while, provided it is for the greater good. Buzz also gets "cranky" when he isn't the "center of attention", as relayed by his elder self in "Good Ol' Buzz".

Buzz has a tendency to fluctuate between basking in his achievements and being humble. He also seems to get tongue-tied when it comes to the ladies, most notably Dr. Ozma Furbanna, Sally and Bonnie Lepton. He is also known to occasionally hold grudges, such as a failed relationship with an unknown woman. He holds a strong dislike for his former friend and current enemy Warp Darkmatter for his betrayal.

He can also be very kind and caring to children, as shown in "Lone Wolf", "Clone Rangers", "Lost in Time", and "Holiday Time ".

When it comes to his favorite foods, Buzz seems to be fine with eating portions that have a single bug on them, nonchalantly flicking the offending creature off of a spoonful of Cosmic Chili in one instance.

Buzz Lightyear appears to be nothing more than an average, if extremely physically fit, human male. He is, however, highly trained in multiple forms of martial arts and self-defense, which augment the abilities offered to him by his standard Space Ranger suit. His suit allows him to fly, utilize a wrist-mounted laser beam, and has a built-in communications system capable of contacting Star Command from distant locations. It also has a built-in environmental system, allowing him to survive in the vacuum of space. The suit is also highly modular, allowing for additional attachments and systems when necessary.

Buzz has a higher than average durability level, being able to be crushed by a massive crystalline hand and forced through the roof of a building without dying.

Buzz is also capable of using Star Command weapons and creating his own. This also makes Buzz capable of piloting all kinds of flying vehicles. Once he even piloted a giant mech to fight Zurg's giant mech with the help of 3 LGMs.