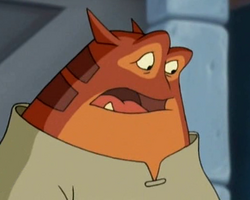 Buster is a male Jo-Adian farmer who briefly worked with the Evil Emperor Zurg.

A Jo-Adian, Buster is a large alien with a rotund and spherical frame. He has four fingers on each hand and two toes on each foot. There are darker-coloured scales upon his back and small teeth jut out from his bottom jaw. Buster is easily taller than other aliens and is quite strong physically.

He wears simple farming clothing as most Jo-Adians do.

Buster had been Booster's childhood friend, the former remaining on Jo-Ad to become a farmer and the latter going off to Star Command and eventually becoming a Space Ranger. Because of this, Buster was always jealous of Booster and it was that jealousy that allowed the Evil Emperor Zurg to manipulate him. As Zurg began to start what would be one of his more "fiendishly clever" schemes, if it wasn't for Buster the Evil Emperor would have succeeded in his nefarious plot to scare little children from eating their vegetables.

At the end Booster and Buster are seen making up, and Buster remains on Jo-Ad to clean up after the mess he had helped cause.

Despite his jealousy with Booster, Buster has a good heart and an honest mind. He is a bit naive, however, and that leads him into trouble when he makes a deal to help the Evil Emperor Zurg with one of his sinister plots to conquer the galaxy.

Retrieved from "https://blosc.fandom.com/wiki/Buster?oldid=24642"
Community content is available under CC-BY-SA unless otherwise noted.