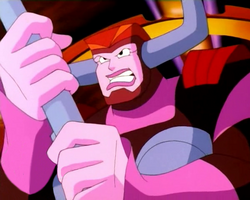 Brun is the leader of the Valkyran Raiders.

Brun is the most warlike of the Valkyrans, which is granted given she is their leader. She is a strong believer of the Valkyran ways and loathes Star Command and the Galactic Alliance. She believes that they moved in on Valkyran territory and has made it her purpose to fight against them by crossing into the Alliance's borders and attacking cargo ships.

Despite appreciating a good battle, she knows when her forces are outnumbered and a retreat is in order. Through this, and through entering battle personally, she shows that she does not consider herself above her fellow Valkyrans and is not willing to pointlessly throw lives away. It also shows that she is neither afraid of getting her hands dirty nor afraid of defeat. However, her speeches and open derisiveness of "civilized" products such as Jo-Adian processed cheese spread, which she called "noxious swill", also indicate how she is set in her ways and not very receptive to change and new ideas.

Retrieved from "https://blosc.fandom.com/wiki/Brun?oldid=24645"
Community content is available under CC-BY-SA unless otherwise noted.