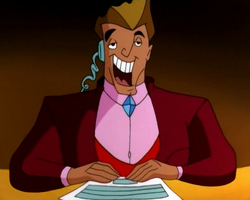 Brent Starkisser is the galaxy's most prominent reporter.

He is often seen at his desk or covering footage for a galactic audience, and he is always wearing the same snazzy, purple suit complete with a gem-shaped neck clasp.

Although he really doesn't have much of a purpose other than to deliver news to the galaxy, he has been seen throughout the series covering footage from Booster's trial with the Raenoks all the way to the attempted assassination of Madame President. He lives and breathes breaking stories.

Retrieved from "https://blosc.fandom.com/wiki/Brent_Starkisser?oldid=25314"
Community content is available under CC-BY-SA unless otherwise noted.