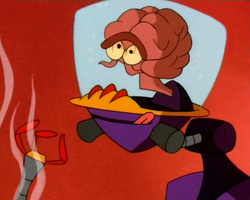 Biographical Information
Physical Description
Production Details
Brain Pod #57 was one of the numerous Brain Pods who worked for the Evil Emperor Zurg. With the help of Team Lightyear, he was able to defect and become a sidekick for the Tangean Grounder Romac.

Just like the other Brain Pods, 57 is essentially a pink, fleshy invertebrate suspended in a fluid-filled dome atop a purple, three-wheeled conveyance equipped with retractable arms.

Nothing is known about 57 prior to his defection, though it's apparent he was unhappy with the conditions on Planet Z, and revels in small luxuries like pizza. With the help of Team Lightyear, he somehow escapes Zurg's clutches and hides out in a hotel on Tradeworld. However, Zurg sends bounty hunter Romac after him, who captures the Brain Pod while he was partying with XR instead of sitting safely in the hotel room as he was told to.

57 tries to strike up a partnership with Romac in the hopes of convincing the Grounder to keep him as a sidekick rather than turning him in, and even assists Romac in catching Buzz. The bounty hunter is determined to complete his mission, however, and brings 57 in to Zurg as promised. Once Romac is free of his obligations to Zurg, 57 pays him one unibuck to rescue himself and Buzz, and Romac agrees, freeing the two prisoners and getting them to safety.

Once aboard 42, 57 steals an escape pod and leaves behind a message informing Team Lightyear he's left to become Romac's sidekick.

Retrieved from "https://blosc.fandom.com/wiki/Brain_Pod_57?oldid=24657"
Community content is available under CC-BY-SA unless otherwise noted.