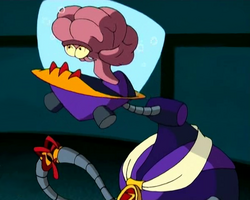 Brain Pod #26 is one of the numerous Brain Pods working for the Evil Emperor Zurg.

He looks very similar to the other Brain Pods, but with the number 26.

He created a fresh, vaguely herbal, and somewhat putrid fragrance Zurg called "Green Winds of Change" and received a medal for it. The fragrance was capable of turning biological lifeforms exposed to it into green blobs. He made an antidote for it as well.

Brain Pod 26 first used the fragrance on Buzz and Mira, who after exposure turned into a big blob. This was part of Zurg's plan to render Star Command helpless.

Later, Brain Pod 26 accompanied Zurg as he boarded Star Command right after all the rangers were turned into blobs thanks to a contagious Buzz and Mira. Just after Zurg thanked Buzz for the "help" he walked off, but soon started blobbing up. Fortunately for Zurg, 26 had the antidote and cured him with it.

As Zurg was trying to hack into Star Command's computers, Buzz and Mira appeared and drove Zurg and 26 back to Zurg's shuttle. Once Buzz and Mira were inside the departed shuttle, Zurg held them at gunpoint, but Zurg ended up gloating long enough for him to blob up, again. This time, before 26 could use the antidote, Buzz and Mira seized it and escaped.

Later, on Planet Z, 26 told a fully-blobbed Zurg that there had been production delays in creating a new antidote and it would have to wait a month. An angry Zurg then ripped 26's medal off from around his neck.

He seems to be a smart scientist, but sometimes he is clumsy.

Retrieved from "https://blosc.fandom.com/wiki/Brain_Pod_26?oldid=26154"
Community content is available under CC-BY-SA unless otherwise noted.