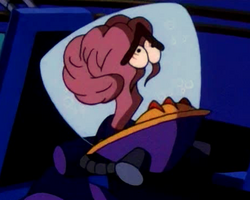 Biographical Information
Physical Description
Production Details
Brain Pod #18 is one of the numerous Brain Pods working for the Evil Emperor Zurg. One of his experiments accidentally revealed the existence of the Alternate Universe.

Brain Pod 18 looks exactly like all of the other Brain Pods with one small exception: the number "18" is written on the back of the purple machine he uses to get around in. He is pink and looks like a brain with eyes and a mouth.

He works on Planet Z for the Evil Emperor Zurg as a scientist. He worked on the device that allowed Zurg to access an alternate dimension where an evil Buzz Lightyear ruled with an iron fist. While investigating the anomaly created by his device, he ran into what appeared to be a mirror image of himself, but was in fact the alternate universe's Brain Pod 81, who captured 18 and brought him into the alternate universe. He was later seen held captive on Evil Buzz's bridge by Zurg; it is unknown whether Evil Buzz returned him to Zurg or if he remained trapped in the other universe.

Presumably increased intelligence as he is a brain and a scientist.

Retrieved from "https://blosc.fandom.com/wiki/Brain_Pod_18?oldid=25361"
Community content is available under CC-BY-SA unless otherwise noted.