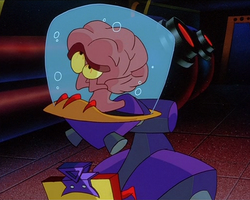 Paradoxically, when Team Lightyear crash-landed with the Alpha-1 and Hornets summoned 13 for orders, the Brain Pod took one look at the craft and dismissed it, thinking it to be a weather balloon.[2]

However, instead of trying to kill the brain pod, Shiv Katall, who was really Buzz Lightyear in disguise, arranged to meet up with the Brain pod in a secret underground bunker located in Zurg space and take him to Star Command where he will be given a new identity.

After Mira, Booster and XR cause problems with this plan, XR comes up with a new idea to get Brain pod 13 out of Zurg Space and to freedom. He has Brain Pod 13 disguise as Brain Pod 18, by simply using a pen to change the number "13" into "18." The Rangers then hide and have the brain pod simply transfer them all off base. However, this plan meets with failure, when Emperor Zurg runs into the real Brain Pod 18 and realizes his mistake.

Commander Nebula, also assuming the Shiv Katall persona, also tries to mount a rescue. Again the plan is to sneak out right from under Zurg, with Shiv supposedly transporting them to Planet Z when in reality they would escape to Star Command.

Retrieved from "https://blosc.fandom.com/wiki/Brain_Pod_13?oldid=21719"
Community content is available under CC-BY-SA unless otherwise noted.