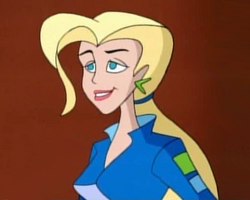 Bonnie Lepton is the daughter of the scientist Spyro Lepton.

Bonnie is tall and slim, with long blonde hair that she keeps tied into a neat ponytail with long bangs.

It is mentioned that Buzz Lightyear had known Bonnie way back when she was a little girl, and it would explain his shock when he sees her after at least ten years. However, because of her father and his obsession with getting revenge on the Space Ranger, Bonnie Lepton complies with her father simply because he is just that -- her father. But just because her father is slightly crazy doesn't mean Bonnie is.

During the episode "Eye of the Tempest" she starts to see a different point of view, and ultimately realizes that her father's obsession has gone too far. Thanks to Bonnie, Team Lightyear stops Spyro von Madman from overtaking a power plant and gathering more power before he could destroy anything else.

In the end she is seen supporting her father, who is now free from the crystal's corruption.

A young woman, Bonnie is both compliant and defiant towards her father. She doesn't get his obsession over Buzz Lightyear, and she intentionally flirts with the Space Ranger against her father's wishes. Bonnie even tries to date him, which sends her father onto a giant, crystal-induced rampage.

All in all, she is a person with a good heart and loves her father dearly; crystal or no crystal.

Retrieved from "https://blosc.fandom.com/wiki/Bonnie_Lepton?oldid=24605"
Community content is available under CC-BY-SA unless otherwise noted.