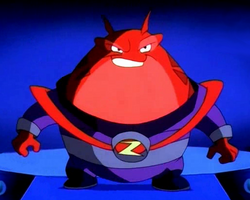 He is a clone of Booster as a kid and he wears Zurg-type armor.

Zurg created him, Zzub and Feara with DNA from Buzz, Booster and Mira. They were supposed to be adult clones but because Zurg was in a rush to have the clones out and ready to fight, he removed them from their tanks before the clones had a chance to grow into adults. Thus, they emerged as young children.

Unlike Booster, he has an evil and more childish personality, but he is smart. Even though he is smaller than him, he is still strong.

Retrieved from "https://blosc.fandom.com/wiki/Blister?oldid=24881"
Community content is available under CC-BY-SA unless otherwise noted.