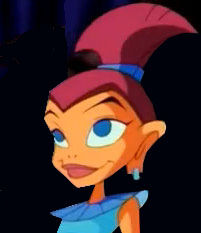 The Beletor is the last of her tribe after a 900-year-long war with the Krnozians.

She has orange skin, red hair, and dark blue eyes, and wears a blue battle suit which gives her superstrength and invulnerability.

At some point in time, the Beletor had been infected by the parasite, much like what happened to her people, turning her hateful and violent and causing her to declare war against the Krnozians. The 900-year-long war, caused by the parasites, culminated in the near extinction of the Beletors and Krnozians, leaving one member of each species as the sole survivors.

When Team Lightyear crashed onto the planet, the Beletor thought the Space Rangers were Krnozians and attacked them, capturing Booster in the process. After learning that they are not her enemies, the Beletor told Buzz and Booster about her struggles and convinced them to help end this war.

A final battle took place with the Beletor being victorious until Team Lightyear realized the insanity of the situation and tried to stop her from killing the last Krnozian. They succeeded and removed the suit from her. XR offered the Beletor a pack of ice. She took it and placed it on her neck, allowing the parasite to be removed from her for good.

With the parasites seemingly extinct, the Beletor and the Krnozian, who also had his parasite removed, lived together in peace.

Her robotic armor gives her superstrength and invulnerability.

Retrieved from "https://blosc.fandom.com/wiki/Beletor?oldid=26417"
Community content is available under CC-BY-SA unless otherwise noted.