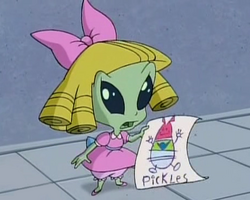 Becky is a young Roswellian girl and one of Booster's best friends.

Becky lives in a little world inhabited by rural, closely-knit country folk much like the towns found in the United States back in the 1950s. She wears a pink short puffy-sleeved, thigh-length dress with a white collar, hem and cuffs, a blue sash tied like a bow in the back, matching frilly pink knee-length bloomers, pink ballet flats and has thick, blonde curls with a matching pink bow complementing her outfit. Like all Roswellian aliens, she has olive-colored skin, opaque eyes, and eyelids that shut vertically rather than horizontally. She has four fingers on each hand and an innocent giggle.

When a tour goes horribly wrong and Team Lightyear is left stranded on an unknown planet, the team finds themselves separated and Booster is left to meet a little alien girl by the name of Becky. At first, she is frightened and thinks Booster is going to eat her, but they soon become friends and she christens him Pickles, thinking he is somewhat of a giant, loveable pet. It turns out, however, that Becky realizes that "Pickles" is an alien who has friends trapped in the air force base stationed in town. With the help of her dad, who is the town sheriff, they manage to rescue Buzz Lightyear, Mira Nova, and XR and Team Lightyear manages to escape on the back of a scrapped airplane welded with the down saucer. Thanks to Becky and her father, Roswell becomes known to the rest of the galaxy.[1]

Becky is an adorable and sweet little girl who doesn't seem to have a mean bone in her little body. She comes off as friendly, charming, and warms up quickly to most people and things. She is also brave, risking her safety to make contact with her friend, "Pickles" (Booster) and doesn't even seem to be afraid of the Evil Emperor Zurg when he comes to conquer Roswell.

Despite being a small child, Becky has impressive infiltration skills, able to enter and exit the Air Force base without being detected. In addition, she has enough technical knowledge to be able to contact Booster even from lightyears away.

Retrieved from "https://blosc.fandom.com/wiki/Becky?oldid=26515"
Community content is available under CC-BY-SA unless otherwise noted.