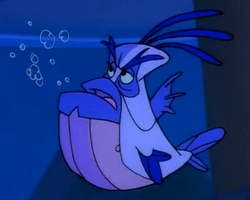 Senator Banda is a male Bathyosian and one of the highest-ranking officials of the Galactic Alliance.

He is a fish-like Bathyosian colored purple and blue and has an elderly appearance.

Senator Banda was at Tradeworld, awaiting for Team Lightyear to pick him up and take him to Luma 9 so that he could enact peace agreements between the Galactic Alliance and the Raenoks. While enjoying sightseeing, his brain had been probed by Crumford Lorak who wanted to steal the defense secrets Banda possessed and sell it to the Raenoks.

Banda's troubles were just starting as Crumford tricked the aquatic diplomat before stealing his suit. Banda was trapped in a restaurant tank, desperately crying for help. He eventually succeeded, telling the waiter to call for Star Command.

Banda was presented as curious and somewhat naive, which Crumford Lorak took advantage of.

Like all Bathyosians, Banda is a skilled swimmer and able to breathe underwater for long periods of time.

"Help! Help! The security of the entire planet is at stake. I besiege you to - What are you looking at?"

Retrieved from "https://blosc.fandom.com/wiki/Banda?oldid=25965"
Community content is available under CC-BY-SA unless otherwise noted.