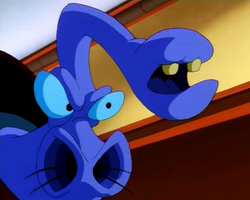 “I was under that bed for three hours!”

The anteater-like criminal is a bounty hunter and a criminal.

He is a blue anteater-like creature with turquoise eyes, large nostrils, a red cape, and a navy suit. His mouth is situated above his head.

The Anteater-like Criminal is one of many bounty hunters that went after Booster to gain the reward placed on his head. He hid under Booster and XR's bed to wait for them. When they did, Booster jumped onto the bed, crushing the Anteater before he could put his plans into action.

After a long and perilous chase, the Anteater and his rival bounty hunters had their quarry cornered until Buzz and Mira came to rescue the Rangers. The Anteater was shortly arrested following the fight.

He has shown to be quite patient, having hidden under Booster and XR's bed and awaited their arrival for 3 hours. However, he expressed his displeasure on doing this.

Retrieved from "https://blosc.fandom.com/wiki/Anteater-like_Criminal?oldid=26506"
Community content is available under CC-BY-SA unless otherwise noted.