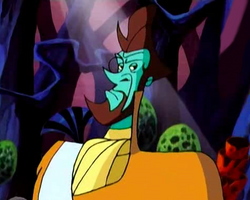 Biographical Information
Physical Description
Powers and Abilities
Production Details
“I'm not sure your tiny brains can understand the complexities of Tangean tradition.”

Angstrom was the Tangean Royal Councilor and King Nova's closest adviser until his true colors were shown.

As all Tangean Royals, Lord Angstrom has blue skin. He also has brown hair, is tall and fairly slender (though he seems to be padded out by his clothing).

Lord Angstrom exhibits nothing but contempt and a pompous air around "out-worlders", and he is only amongst them to relay a message to Mira Nova that she is soon to be wed.

It is soon revealed that he is merely using the wedding as a distraction so he can attack the palace with the help of a Tangean Grounder gang, as he wishes to usurp the throne from King Nova. Fortunately, Team Lightyear arrives in time to stop him, and Fop Doppler drops a chandelier on him when he attempts to escape.

At the end of the episode, Angstrom is seen arrested and sent off planet for his crimes.

In the episode "Good Ol' Buzz", Lord Angstrom is seen yet again fresh out of prison. This time, he has his sights set on Mira, only to realize that by the older version of Buzz being there, Mira is oddly absent due to his time-meddling. Lord Angstrom is soon rounded up again, and sent back to prison.

Like a model Tangean, Lord Angstrom finds the company of off-worlders distasteful and expresses often how Tangeans are superior to them in every way, shape, or form. He is arrogant, pompous, and scheming; waiting to show his true colors once the Grounders infiltrate the palace for an overthrow. He also carries grudges, trying to enact his revenge upon Mira in "Good Ol' Buzz".

Has the same abilities any Tangean Royal has. However, his powers are more developed than Mira's. For example, he managed to temporarily brainwash her into forgetting that she had seen him conversing with the Tangean Grounders.

Retrieved from "https://blosc.fandom.com/wiki/Angstrom?oldid=24225"
Community content is available under CC-BY-SA unless otherwise noted.