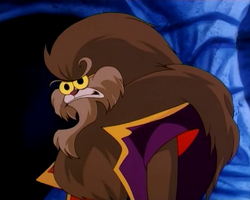 Biographical Information
Physical Description
Production Details
Aarrfvox is a Shragarakian politician and one of the senators of the Galactic Alliance.

Aarrfvox was present at the senate during Zurg's attempt to destroy various planets in order to bring down the Galactic Alliance.[1]

While arguing for a petition on animal rights with Senator Phlegmex, the two were captured by the Chlorm and placed into their zoo.[2]

Aarrfvox seems to place great value on animal rights, having once tried to persuade his fellow senators to sign a petition of his on them.

Retrieved from "https://blosc.fandom.com/wiki/Aarrfvox?oldid=21014"
Community content is available under CC-BY-SA unless otherwise noted.