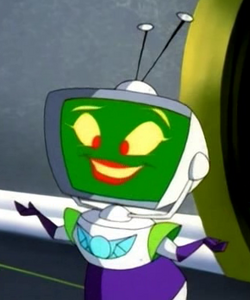 42 is a female-programmed robot who used to be a Star Cruiser before an electrical surge gave her life.

Her face is a green computer-like screen. She possesses bright yellow eyes with equally bright red pupils. She has a roundish mechanical body, and it is painted with the Star Command colors of light green, white and purple. Instead of feet, she has one wheel attached to help her move around. She has two antennae on her head.

As a Star Cruiser

As a Star Cruiser, she was much like any cruiser, with the standard look and no real personality to speak of. She could not talk unless XR was communicating with her systems. Even then, Buzz Lightyear considered her a valued member of their team, even going so far as to mourn the loss of his ship during a confrontation with Zurg.

Whether 42 remained the same Star Cruiser throughout the duration of Team Lightyear's adventures is uncertain due to the amount of times the cruiser has been destroyed.

As a self-aware entity

Originally an Andromeda-class Star Cruiser, Star Cruiser 42 came to life upon the fated meeting of the Valkyran warship and experimental LGM technology. During the beginning of 42's awareness she (assuming a female identity) kept her sudden existence a secret to all but one Space Ranger, the Robot Ranger XR. From there she developed a close bond with her fellow robot counterpart and was ultimately key in the victory against the Valkyran raiders.

42 is a strong, confident AI who dislikes it when people (such as Buzz) question or cast aspersions on her abilities. However, despite her touchy demeanor, she portrays herself as a thoughtful individual and takes consideration in important decisions such as choosing to explore her newly found being over a relationship with XR.

As a ship she possessed what would be expected from Star Cruisers: laser cannons, flight, superior handling, and navigational systems. But as a robot, however, she currently does not exhibit anything out of the ordinary apart from obtaining a distinct personality like XR did.

Retrieved from "https://blosc.fandom.com/wiki/42?oldid=26237"
Community content is available under CC-BY-SA unless otherwise noted.